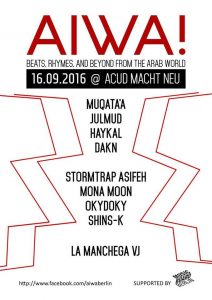 In the recent years, there’s a group of people exploring/experimenting remarkable distinctive styles and unique sound from the local hip-hop scene of Ramallah, Palestine.

Aiwa this time invites 4 of the notable MCs/Producers from the scene.

Muqata’a: is a musician and MC based in Ramallah, Palestine. Creating sounds using sampled material, field recordings, and electronic devices, the results range between hip-hop, downtempo, and glitch He has composed and produced music for artists such as Kronos Quartet, Bukue One, Jehst, Tamer Abu-Ghazaleh and others, and has appeared as an MC on albums for artists such as Heliodrome, Slovo, Bonnot, and Beatoven to name a few. Co-founder of the Ramallah Underground Collective which has toured across the Arab World, Europe, and Australia, until the collective split up in 2009. Muqata’a
is also co-founder and member of audio-visual group Tashweesh, with whom he is currently touring. He has composed several international and local film scores, as well as dance theater performances, and is now working on different collaborative and solo projects.
soundcloud.com/boikutt

Julmud: a producer, percussionist, keyboardist, and vocalist/mc based in Ramallah-Palestine, samples and combines sounds from across the globe to create a new non-generic form of music. He has produced work for different MC’s such as Haykal, Shua, Dakn, among others who are also a part of his crew (Saleb 1). Julmud was also working closely with Al Nather and Muqata’a as the group Juzo’ Min, from which several projects emerged. And now he is currently in the process of producing a variety of solo works. soundcloud.com/julmud-1

Haykal: Is an MC/Producer based in Ramallah. Being influenced by his surroundings, his work is an accumulation and response to all that he experiences socially, politically, and culturally. Haykal is currently working on several upcoming projects with a multi-disciplinary approach. soundcloud.com/haykalonol

Dakn: an MC, producer & DJ based in Ramallah, Palestine. As part of the Saleb 1 crew and as a solo artist, he has released many singles on the internet as well as collaborated with multiple musicians and MC’s. His lyrical content is controversial, conscious, and abstract while his production is a variation of different styles that blend to create a new sound with every release.
soundcloud.com/dakn-1