Peace in Palestine - can this dream still come true?

Peace in Palestine - can this dream still come true?

Palestine is a name for a region that has undergone dramatic change. Once sounding like a divine promise, it now seems to be a synonym for hopelessness. How did the situation in the region deteriorate to the dead-end it is at now, and is there a horizon - can a just peace between Israelis and Palestinians, the two peoples living on the same grounds, even be imagined at this point in time?

The distinguished Palestinian leader Dr Hanan Ashrawi will give a brief introduction and an overview of the current situation in Palestine, followed by a panel discussion with Ruth Fruchtman, author, journalist and co-founder of 'Die Jüdische Stimme'. The two women of the same age have lived history - what were their ideas, their hopes and dreams, and what were the actual experiences and lessons life taught them? Dr Housamedden Darwish, philosopher from Aleppo now living in Cologne, will complement the discussion by contributing the perspective of other Arab countries.

The main objective of this event lies not in discussing the big political picture, but in showing the personal experiences of it; in a way turning the famous phrase 'the personal is political' from its head to its feet - the political is personal: in the end, this is truer.

After the panel discussion there will be room for questions from the audience.
The event will be concluded by a small reception.

The panel discussion will be in English, simultaneous translation into Arabic is provided by Dr Günther Orth. During the q/a with the audience, Dr Orth will translate into Arabic and German, Hikmat Bushnaq into English.

As seats are limited, please register until October 13 using this link. You will receive a confirmation by email.

is a distinguished Palestinian leader who served as the official spokesperson for the Palestinian Delegation to the Middle East peace process and has been elected numerous times to the Palestinian Legislative Council. She is a member of the Third Way Bloc and was the first woman to hold a seat in the highest political body in Palestine when she was elected as member of the Executive Committee of the Palestine Liberation Organization in 2009 and 2018.

Ashrawi is a passionate advocate of human rights and gender issues and won numerous international peace, human rights and democracy awards as well as honorary doctoral degrees, and serves on the Advisory board of several international and local organizations. She is also a civil society activist and founded several organizations, such as the Palestinian Initiative for the Promotion of Global Dialogue and Democracy (MIFTAH), and the National Coalition for Accountability and Integrity (AMAN), the winner of the Ibn Rushd Prize 2017.

Ashrawi studied at the American University of Beirut, from where she received her bachelor's and master's degree in literature. She earned a PhD in Medieval and Comparative Literature from the University of Virginia. She lives in Ramallah.

is a writer and journalist. Her novel Jerusalemtag [Jerusalem Day], Klax Verlag Berlin, 2017, describes the problems of a European Jewish family, its commitment to Israel, and the conflict of loyalities when they lose their illusions in the face of reality.

Her documentary reports and features for the radio on Palestine-Israel are critical of Israeli policies. Der Zionistische Traum – Das Ende einer Illusion - The Zionist Dream – The End of an Illusion (WDR /RBB 2003 was repeated twice in 2018 by the WDR - because, as the editor said, the situation had not changed in the last fifteen years.) Her last feature Palästina-Israel – Ein Wintermärchen [Palestine-Israel – A Winter'sTale] was produced by RBB in 2009.

Ruth Fruchtman was born in London and studied German at University College London (B.A. Hons.) Brought up in a Jewish Zionist family, she spent several years in Strasbourg, France, before moving to Germany in 1976. It was in Stuttgart, where she worked at a publishing firm, that her commitment to a critical analysis and intense involvement with the situation in Palestine-Israel began. When she moved to Berlin in 1986, she joined the Jewish Group led by Alisa Fuss, President of the International League of Human Rights, later the Arbeitskreis Nahost – an international group both Arab and Jewish, and in 2003 became co-founder of Jüdische Stimme für gerechten Frieden in Nahost (European Jews for a Just Peace Germany, the German section of the EJJP). She has been a member of the Ibn Rushd Fund for the past few years. Ruth Fruchtman has visited Israel, Jerusalem and the Westbank many times.

is a philosopher and specialized on hermeneutics and the methodology of social and human sciences.

Darwish worked as a freelance researcher, assistant professor, and visiting researcher on the subjects of Eastern philosophy and the Arab uprising, and on trans-cultural concepts, as well as on Political Islam and Modernity. Darwish participated in several panel discussions focusing on the Arab and Islamic thought, political and moral philosophy, cultural studies and migration Studies. He has numerous publications in magazines about the situation in Syria, about an uprooted nation, and the Arabic state of mind. He also published several books about the hermeneutical philosophy and the French philosopher Paul Ricœur as well as critical Texts on Arab Political Thought, Syrian Revolution and Asylum.

After completing his education in Europe he went back to his native Syria in 2010. He fled the war and left to Germany in 2014 and currently lives in Cologne.

The event is organized in cooperation with the Jüdische Stimme für einen gerechten Frieden in Nahost, the German chapter of The Jewish Voice for a Just Peace in the Middle East, www.juedische-stimme.de 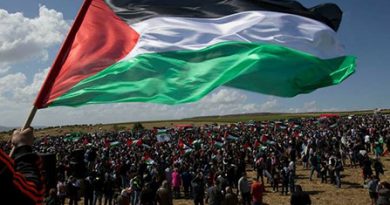 We're seeing every area of the West Bank under military invasions, home demolitions, settler attacks. As EU citizen, you have the power to stop this! Sign to end European complicity with theft and violence! Your voice matters! https://stopsettlements.org/ #StopTradeWithStolenLand

We need 1 MILLION signatures from European citizens before Feb 21 to #StopTradeWithSettlements.

Join with us to #EndIsraeliApartheid!