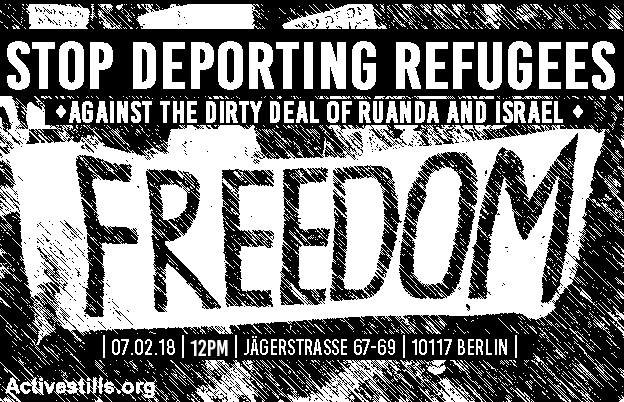 On February 7 we will protest in front of the embassy of Ruanda in Berlin against Ruanda’s participation in human trafficking and the role in Israel’s mistreatment of African refugees.
Join us in solidarity with refugees and asylum seekers.

On this day we will also flood social networks targeting the #prime ministers of Israel, #Ruanda and #Uganda, as well as the #UNHCR, The African Union and The #European Union. If Israel refuses to recognize asylum seekers as refugees, the #UNHCR must take responsibility and resettle them to safe states and guarantee their protectioץ
The Israeli government is planning to forcefully deport to Ruanda over 38,000 asylum seekers from Eritrea and Sudan who seek shelter in Israel. Israel and Ruanda have reportedly signed a secret accord, in which Israel would pay the Ruandan government 5,000$ for every deported refugee.
Previous asylum seekers deported “voluntarily” to Ruanda faced severe exploitation, human trafficking, secondary deportation to their country of origin, and death. The Israeli government refuses to assess and recognize asylum requests of refugees from Eritrea and Sudan: while in Europe over 86% of asylum requests by Eritrean nationals are accepted, Israel has only recognized 0,5% of the Eritreans who made their perilous way to the country. The latest plan to deport all asylum seekers would violate their inalienable rights and lead to a humanitarian catastrophe. �As part of a global day of protest in front of Ruandan embassies worldwide, join us to the protest in Berlin to demand -��No to the forced deportation of asylum seekers from Israel!��No to the Ruandan collaboration with the Israeli deportation plan!��Protection, recognition and dignity to all refugees!

XX The International action day was initiated by the African refugees communities in Israel. independent Israeli anti-racist activists organise solidarity actions and demos worldwide, We in Jewish Antifa Berlin support it and were asked to post and promote it as an event in Facebook. XX

BACKGROUND information:�Tens of thousands of persecuted Eritreans, fleeing dictatorship, followed the lethal migrant route through the Sinai Desert to Israel. Many were held and tortured in slave camps in Sinai. There are currently about 35,000 African refugees in Israel plus 5,000 children who were born in Israel. In 2009, the UN Refugee Agency (UNHCR) transferred responsibility for RSD’s to Israel’s Interior Ministry. To date, Israel has recognized about 10 refugees. For comparison, the global average is 70-90% recognition rate for Eritrean and Sudanese refugees. In 2014, Israel began its deportation policy, pressuring African refugees to consent to return to third states. To elicit ‘voluntary’ consent, refugees were persecuted and sent to ‘Holot’ detention center. Israeli human rights organizations fought this policy in the High Court of Justice, with moderate success lowering what was initially an unlimited detention period to one year. Local and international human rights organizations brought evidence that Israel deceived refugees by promising protection in third states, but was actually sending them back to their states of origin, from which they fled. Thereby, Israel violated the fundamental principle of international refugee law- Non-Refoulment- with the full knowledge of the UNHCR. An estimated 6000 Sudanese refugees, returned by Israel to Khartoum, Sudan, were murdered, tortured, raped, or held under tight surveillance. About 2500 Eritrean refugees, returned by Israel to Eritrea, faced a similar fate. Other refugees, deported to Rwanda and Uganda, were stripped of all their documents and belongings, arrested, tortured, raped, and left with no protection. Currently, Israel announced a new FORCED deportation policy, approved by the High Court of Justice., according to which ALL AFRICAN REFUGEES ARE TO BE FORCEFULLY DEPORTED to Rwanda or Uganda or otherwise FACE INDEFINITE CRIMINAL DETENTION.. Rwanda and Uganda have so far denied an official deal with Israel, or their intention to provide these refugees with protection or refugee status.